In June 2012 I experienced a quite moving concert in Istanbul.[1] Both my ticket and the concert poster on the wall at the entrance to the venue named the performing group as “Metin&Kemal Kahraman,” indicating the presence of the two brothers Metin Kahraman and Kemal Kahraman, plus their small group of accompanying instrumentalists and singers. But of the two brothers, only Metin was actually physically present on stage. His brother Kemal lives in exile in Berlin, and cannot return to Turkey, the country of his birth, because of charges against him related to leftist activity — being a member of a banned political organization — during the 1980s. As Turkish social scientist Leyla Neyzi explains, “Unable to enter Turkey, Kemal does not have German citizenship either, living in the in-between legal status of refugees.”[2] When performing outside of Turkey, the two brothers can share the stage to perform the music they have created together and released on several CDs, all of which are freely available in Turkey and in other countries.[3,4] But for concerts within Turkey, Metin alone represents the Kahraman brothers on stage, even though the name of the group always also includes Kemal’s name and thus acknowledges his part in the creative process behind the music.
At the concert I attended, when Metin first took the stage along with four other musicians, there was an empty chair next to him on the stage. At first I thought that this empty chair was intended to evoke the present-absence of Kemal — emphasizing that a place was reserved for him on stage, but that he could not take that place because of his exile status in Germany. It turned out that the chair was actually meant for singer and group member Maviş Güneşer, who joined the other musicians on stage after the first few numbers. But still the idea of the empty chair as a metaphor for Kemal’s absence stayed with me. Towards the end of the first set, a guest singer also joined the group on stage for a few songs. An additional chair was brought out for her. After she finished her guest spot and left the stage, her chair remained, unused on stage until the end of the concert. Again, an empty chair, seemingly indicating a present-absence — a space reserved for someone who should be there, but left unoccupied. 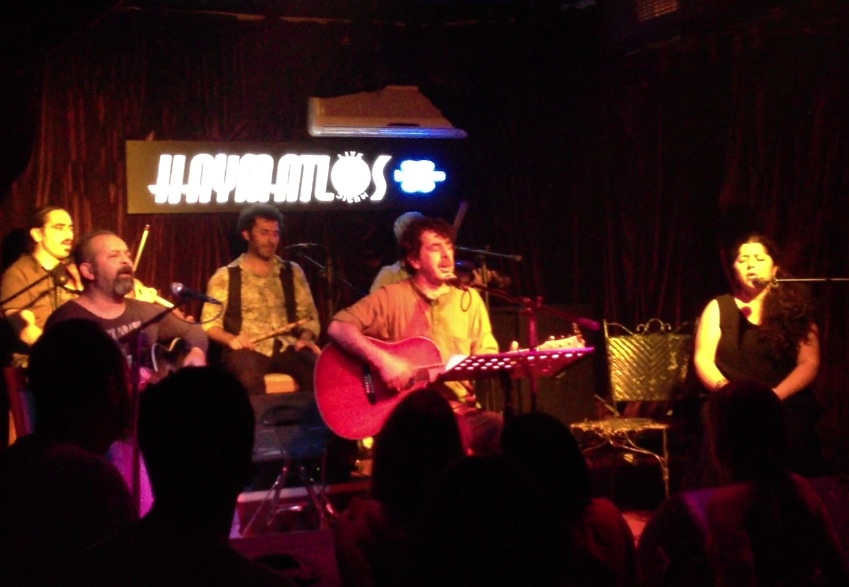